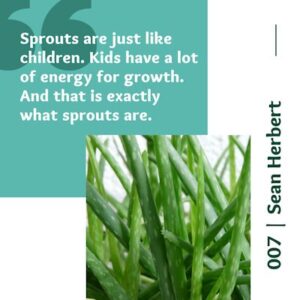 On today’s show, we interview Got Sprouts? co-founder Sean Herbert who shares with us the massive health benefits of consuming living foods and sprouts.

Sean and his wife Jody are experts in this highly niche space, and hearing them today will surely encourage you to switch to a healthier, plant-based lifestyle.

Back in 2004, Sean was diagnosed with severe Crohn’s disease which made it extremely difficult for him to consume and digest “normal” food. Fortunately for him, his wife Jody stepped in and put Sean on a diet of sunflower and pea sprouts. Slowly but surely, Sean felt revitalized.

Encouraged by his newfound diet, Sean started sprouting in his kitchen. And this eventually led to Jody and Sean co-founding Got Sprouts? in 2006.

As a trusted authority in a highly niche sprouting space, Sean shares why sprouts are the most nutritious superfood on the planet. Compared to other foods, your body requires significantly less energy for breaking down sprouts. Because of this, eating sprouts will leave you feeling energetic

You will also get some delicious recipes for salads and juices in today’s show.

Perhaps, the biggest benefit of tuning in today is that you will learn how to grow your own sprout garden. Sean also reveals why soil-based sprouting is more beneficial compared to soil-less sprouting in this segment of the show.

Apart from sprouts, we also discuss some unknown facts of other superfoods like wheatgrass and chia in today’s show.

What You Will Learn In This Show