"It's About Optimizing Your Health"

When it comes to the foods you eat, you have choices. One of those choices has to do with how far the food traveled before it made it to your dinner plate. In this article, you will see the flow of food from farm to plate and consider the potential problems associated with the system and the likely inevitable impending consequences for relying on our flimsy system.

Consider the travel of a single vegetable before it makes it to your dinner table. Once harvested, bushels are loaded on an oil dependent farm truck that brings it to the plant for oil dependent machine washing and processing. 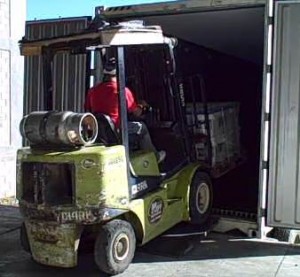 The ship is pushed across the ocean where the container can again be lifted by crane to land where it can again be picked up by a climate controlled 18 wheeler for transportation to an oil dependent facility owned by the one who purchased the container of vegetation for resale of the contents.

From there, the whole process starts all over again as the foods are often processed and changed, repackaged into smaller packages and then redistributed in oil dependent climate controlled trucks where they will change ownership to new oil dependent owners.

If we are lucky, the new owners are the central distribution centers for our grocery stores. They will assemble various food products together to fill up an oil dependent climate controlled 18 wheeler that is sent to the grocery store where it can be unloaded by oil dependent forklifts and eventually moved to the store shelves.

“Nine Meals Away From Anarchy”

Lord Cameron of Dillington, a British farmer, coined the phrase “nine meals away from anarchy”. He explained that if our fuel supply was suddenly interrupted, the transportation of food to the stores would be interrupted and the grocery stores would be out of food within 3 days. Although, they would probably run out faster due to the human nature of panic shopping.

You see, whether meats, dairy, or vegetation, our food supply is oil dependent. Farming is done with tractors and machinery that is mostly oil dependent. Our foods then travel great distances to make it to the grocery stores. Much of it travels oversees before it even makes it to central distributing locations. It can pass through many middlemen before it finally makes it to us.

What is the practical solution? Consider Growing Local. (You have to see the video on the “Growing Local” page!

Phycocyanin from Raw Living Spirulina May Save Your Life!